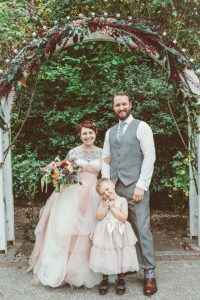 When Bride Lulu was trying on her wedding dress, her son Max really dug it. “He fluffed up all the layers and danced around with me then said ‘I want a big pink dress at the wedding too!'”

They decided to check out dresses together and Max chose his favorite — a hot pink creation. However, when they got closer to the wedding date, one of Lulu bridesmaids’ daughters brought Max a different dress option that the girl described as looking like “a sippy cup of champagne.” (Which is the best descriptor for a pink dress I’ve ever read or will ever read.)

Max went wild for it and ended up wearing it to the wedding, and the results are priceless.

He mostly wears his regular ‘boy’ clothes, but when I paint my nails, which is infrequent, he wants to as well. And several times a year he wears a tutu to school. I don’t think he will be transgender, as he doesn’t want to be a girl as far as he’s told me. Most of it is just play. It wouldn’t matter to me either way, though.

He mostly just loves to dress up and do what he likes to do. I just asked him how he felt in his dress on the wedding day and Max says he felt ‘good, happy, and my dress was awesome.’

Whatever path Max chooses as an adult – I think his parents have set him up amazingly well by encouraging him to follow his heart and make decisions that make him happy!!

Thanks Rock n Roll Bride and Cosmo for sharing.