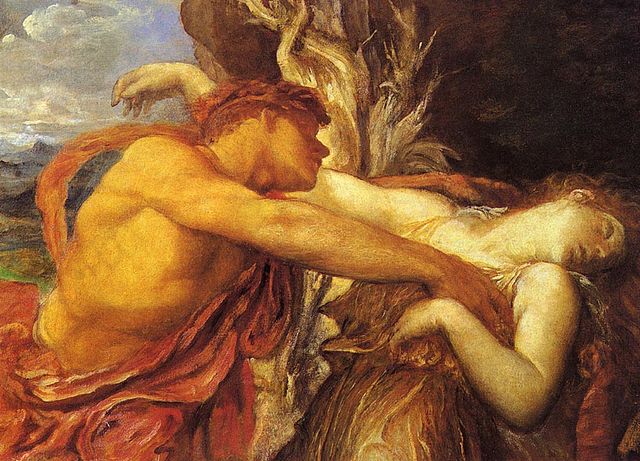 Orpheus and Eurydice story is an ancient greek tale of desperate love. Orpheus fell deeply in love with and married Eurydice, a beautiful nymph. They were very much in love and very happy together. Aristaeus, a Greek god of the land and agriculture, became quite fond of Eurydice and actively pursued her. While fleeing from Aristaeus Eurydice ran into a nest of snakes which bit her fatally on her legs. Distraught, Orpheus played such sad songs and sang so mournfully that all the nymphs and gods wept. On their advice, Orpheus traveled to the underworld and by his music softened the hearts of Hades and Persephone who agreed to allow Eurydice to return with him to earth on one condition: he should walk in front of her and not look back until they both had reached the upper world. In his anxiety he forgot that both needed to be in the upper world and he turned to look at her, and she vanished for the second time – forever.