How to include kids in your wedding 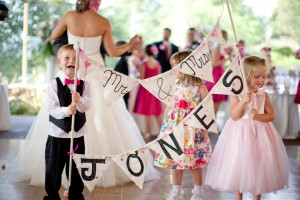 Whether they be your own children, family or friends children, there are so many neat ways to include kids in your Wedding, giving them special roles in your big day.

My favourite has to be the Wright family who I was lucky enough to marry on the 1st of January this year. Michael was marrying Maree and they were becoming a family including Maree’s three cute kids! The two daughters walked Maree up the aisle where Michael and their son were waiting for them. After Maree and Michael exchanged rings Michael presented the children with some beautiful gifts to symbolise the start of their new life as a united family – it was just gorgeous (although their son was worried he was going to be given a pretty necklace like the girls as well!). The children remained at the altar throughout the ceremony with their eldest daughter reciting a poem before I pronounced them ‘the Wright family’ Michael!

Here are some other great ideas:

♥ Traditionally children have been included in the bridal party as ring bearers, flowergirls, page boys or ushers.

♥ Older children may like to be marriage partnersmaid or best woman/man.

♥ Adult children may be witnesses to your marriage.

♥ Children can also walk their parents down the aisle.

♥ A special exchange could happen from parents to children – the girls could receive necklaces and the boys could be given age appropriate watches.

♥ As we saw in the Angelina Jolie and Brad Pitt wedding – you could even have your children decorate your wedding dress! A less risky creative option however may be to let them make decorations to be included in your theming.

♥ If your children are of a certain age appropriate vows could be crafted for them.
Unity Ceremonies are also an option which the entire family can be involved with. There is the Candle Ceremony, Sand Ceremony or Rose Petal Ritual which there are a few variations of.

♥ For babies, you could theme their cot to match your wedding colours and have at the altar with you.

However you decide to include the children – just don’t do this: