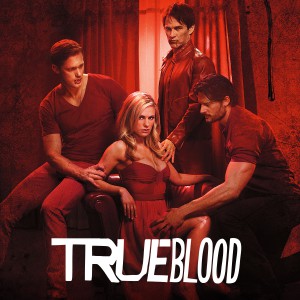 Speaking of tv shows – If you haven’t watched (what now must be) cult tv classic True Blood – you have to!
It stars New Zealand’s very own Anna Paquin as Sookie a telepathic fairy who falls in love with 167-year-old vampire Bill (who doesn’t look a day over 25).

And that’s the believable part. But through every season’s twists and turns, just when we find ourselves scratching our heads at Sookie’s loyalty and attraction to Bill, he’ll find a way to redeem himself, at least temporarily. We can’t pretend to know where their story is headed, but this supernatural super couple (played by real-life married couple Stephen Moyer and Anna Paquin) will be fun to watch along the way.

But I think Sookie and Bill’s tv love story highlights opposites attract and you can’t help who you fall in love with!

And I found this fantastic blog: 6 Things You Learn from Watching True Blood

Sookie is half human, half fairy. Bill is a vampire. Crystal is a were-panther. Sam is a shifter. The point is, each of them felt like a freak, until they started meeting more of their kind or of other types of supernatural creatures. Everybody has something that makes them unique and that they worry others will scrutinize.

2. Telling the truth hurts a lot less than comforting someone with a lie.

Learn from Bill’s blunder, which lost him Sookie. He lost her because he couldn’t be honest with her. Sookie wasn’t mad that the reason he originally sought her out was because Sophie-Ann the vampire queen of Louisiana told him to. She was mad because in all their time together, he never told her the truth about how they met. (Okay how they met was also problematic, but she was more upset about the lie.) So, next time you think about lying, even as an omission, think of how Bill lost Sookie.

3. You can’t change who you are, so you might as well embrace it.

Sookie spent a lot of her life wishing that she could change who she was. Sure, she’s a half human, half fairy who can read minds, and on the scale of normal, she’s not even on it. She thrives on danger, and by the time season four rolls around, she just decides to go with it and no longer allows it to throw her off or take her by surprise.

4. Don’t go it alone when you have friends that care about you.

If I’ve learned anything from watching four seasons of “True Blood” (and several seasons of “Supernatural” and other shows about supernatural beings), it’s that bad things happen when you isolate yourself. The season four example of this is when Eric goes to confront the witch on his own and loses his memory. Moral of the story: If you have people who want to go through this crazy life by your side, you should let them.

This one kind of goes along with the “Nobody is normal” lesson, but it gets its own bullet point based on Episode six when Jason has a conversation with Jessica. He says that he wishes he was special like Sookie. Jessica looks at him and says, “Now look at you. How can you not think that you’re special?” The truth of the matter is everyone has someone that makes them special, but sometimes, you struggle to see it yourself.

6. When in doubt, the vampires can help deal with the other supernatural creatures and keep your life interesting.

Let’s face it, Bill and Eric fix all of Sookie’s problems, unless her problems are of the vampire type. When they end up creating the problems, Sookie has a run for her money. Good or bad, she never has a dull moment.