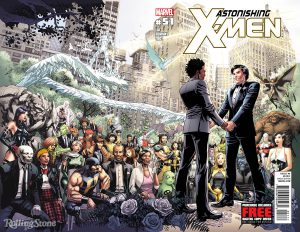 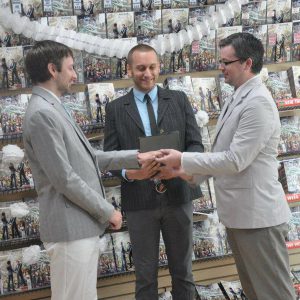 How cool is this wedding theme??!!

A Marvel Comic book is the inspiration for this real-life wedding. Back in 1992 Marvel made headlines by revealing that Northstar, an X-Men superhero, was gay. Twenty years later, the character was set to wed his longtime partner Kyle in Astonishing X-Men #51, in stores on June 20 2012.

As an X-Man, Northstar routinely fights against bigotry, as he is a mutant, and mutants are the most feared minority group in the Marvel Universe. Astonishing X-Men writer Marjorie Liu looked to Northstar’s relationship with Kyle as a way to write an inspiring story about characters who feel like outsiders even among outsiders. “Here are two people, trying to live their lives – mutant and gay, black and gay – empowered in their own ways, but also fringe-dwellers,” says Liu. “And they’re making it happen. They’re living life on their own terms. It doesn’t matter that it’s a superhero comic, the message is: You can do the same thing.”

And that is exactly what a real-life New York couple did – tying the knot in a famous comic book store. X-Men fans Scott Everhart and Jason Welker were selected from more than 50 applicants to get married in New York City’s Midtown Comics in honor of Astonishing X-Men #51 which features the wedding of Northstar to his boyfriend Kyle.