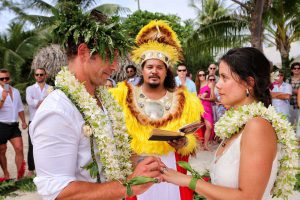 It was hard to find info on what happens in a traditional Tahitian wedding – the internet brought up weddings at resorts for westerners, but what I really was interested in was the traditional ritual for a Tahitian couple. This is still pretty cool even if it is the slightly hokey palangi version…

This wedding took place where legend holds god descended atop a rainbow on the land of the gods – Bora Bora.

The tahua leads the couple to where the ceremony will take place. There’s a sacred protocol followed in the blowing of the pu; here blown in the 4 directions of the earth and as a call to the elements of earth, sea, air and fire:

The tahua, clad in red & yellow – the sacred colours of royalty – uses the pu (conch shell) in a tradition that dates back several thousands of years to call upon the divine, to call down the ancestors and to welcome the bride and groom.

The tahua leads the couple to where the ceremony will take place. There’s a sacred protocol followed in the blowing of the pu; here blown in the 4 directions of the earth and as a call to the elements of earth, sea, air and fire

There are 3 essential elements in a Tahitian Traditional Wedding: The auti, the plant sacred to Tahitians. Water – taken from the ocean (moana), the greatest temple on earth. Tiare Tahiti – the wonderfully perfumed flower which symbolises harmony & the sharing of all things.

In recognition of the marriage being sacred, the wedding is first blessed using auti.

The sacred bond, the union of the two, is recognised by the tying of a strip taken from the back of the auti leaf which will call in good and protect the couple against evil. In ancient times Tahitians would tie the strips to the entrance to their fares (homes) to protect their privacy.

The exchange of Tiare Tahiti – the leis have been given to the groom by the parents of the bride as a sign of his having been welcomed into the family as one with other family members. The Tiare Tahiti is the symbol of the love for one another.

The exchange of vows.

The couple are then wrapped in a tifaifai; red signifying royalty and love, being wrapped together to signify their union; the union given the benediction of the tahua:

Members of the family would then wrap the couple in a second tifaifai, blue to signify moana – the ocean, the sea. Another moment of great emotion:

It is a tradition in such marriages to be given wedding names. Finding the names is a complex issue involving copious research into the fundamental genealogies of those to be married from which the origins of maraes (temples) and the rights to carry certain titles flow. In tracing to Taaroa Tahi Tumu de Vaearai, Ofai Honu & Marotetini – the 3 founding lineages – the couple were given the names Tane & Vahine Te Moana Rau Tehea Nohomarae O Marotetini.

The names are recorded on tapa & the document given to the couple during the ceremony.